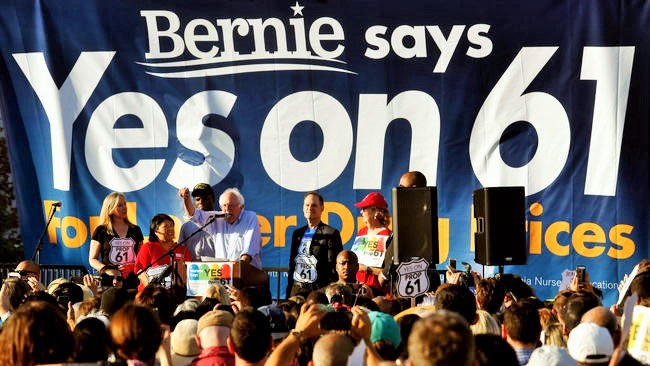 El Cerrito Progressives applaud you, Senator Bernie Sanders, for supporting Proposition 61 and taking a stand against the exorbitant cost of pharmaceuticals in our state and in our nation. The measure would prohibit the State of California from paying more for drugs than the U.S. Department of Veterans Affairs, which pays the lowest prices in the nation. This Proposition takes a stand against corporate greed.

While opponents stoke fears that passage of 61 will lead to price fixing and higher drug prices, bold leadership by nurses’ and doctors’ organizations as well as progressives, including Bernie Sanders, are willing to act on measures that will put the brakes on outlandish profits for Big Pharma at the expense of taxpayers and their lives.

Drug companies are spending close to 100 million dollars to defeat the proposition. And where is the California Democratic Party? The party didn’t take a stand for or against Proposition 61. Why the ambivalence? This could well be the influence of corporate donations and heavy lobbying on the part of former Democratic Party legislators such as Assemblyman (Assembly person, Fresno) Henry Perea. Mr. Perea now directs field operations in California, Arizona and Nevada for the Pharmaceutical Research and Manufacturers of America, better known as PhRMA.

If we follow the money, there need be no ambivalence about Measure 61. El Cerrito Progressives join Bernie Sanders and the Yes on 61 Campaign to manage state drug costs.