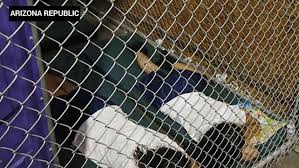 We have all been deeply affected by the stories of minors in ICE custody being held in cages. We want to continue to support the efforts of family reunification, by supporting the young immigrants seeking asylum to join their families in the United States. We cannot turn our backs on the thousands of unaccompanied minors living in our community, awaiting reunification with their family. Our new fundraiser, Cookies not Cages, will raise funds to support East Bay Sanctuary Covenant (EBSC).    Currently EBCS needs additional legal support to help unaccompanied minors get Special Immigrant Juvenile Status (for those that have been abused and neglected) and asylum. Since 2014 EBSC has helped 210 youth gain asylum! Your donation will provide the necessary legal support for youth to be reunited with families.

Thousands of unaccompanied minors are living in California and hundreds are attending local area schools.  EBSC works with many families in the East Bay including El Cerrito. One family’s story is as follows:

With a baby due within two months, a Guatemalan mother of two named Celia, risked her life to journey to the United States. Celia escaped from an abusive husband in Guatemala. Knowing the dangers of the journey, she arranged for her older boys, ages 12 and 14, to be cared for by their grandmother. Once in the U.S., Celia found legal support and applied for and was granted asylum.  She was fortunate to come before the Trump administration removed domestic violence as a legitimate claim for asylum. Celia, after some months, had her baby and settled in El Cerrito with her sister, and three nieces and nephews and began to work to support her family. She desperately wanted to reunite with her children in Guatemala. When her mother passed away, two years later, her sons, now both teenagers, were forced to live alone.  The boys, concerned about being recruited by local gang members and forced into a world of violence and drugs, decided to make the difficult journey to the U.S. to join their mother. They crossed the border, and along with other unaccompanied minors, lived in a youth shelter for several months while a social worker contacted their mother. After two months, they were reunited with their mother in El Cerrito. With the help of East Bay Sanctuary Covenant, both boys received asylum and are now completing their high school studies locally and working. 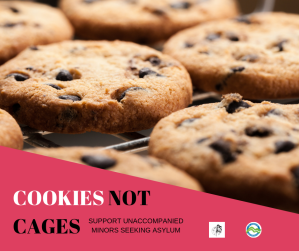 The official Cookies Not Cages campaign begins on the 4th of July at the El Cerrito One World Festival.  That day we will be collecting money for EBSC and educating people on the crisis of unaccompanied minors. We hope to have some gifts for those who give large donations.

We are also running a GOFUNDME campaign where the money will be directly deposited to EBSC. The link is here. You can pass it on by telling people to search for Cookies not Cages on GOFUNDME.

Finally we will be sponsoring monthly bake sales July, August, September, and October on the third Saturday at El Cerrito Plaza (near Trader Joes) and on the 3rd Sunday at Kensington Farmers Market.

Matching Campaign:  Last year we raised a phenomenal amount of money thanks to generous donors willing to match our bake sale daily contributions. Please contact us if you are willing  We are looking for others to match some parts of a bake sale. You can do it up to a limit (for example a match with a $250 limit). If you know a business who might be willing to help or an individual please have them contact us at ecprogressives@gmail.com.

Our goal is to match the 10k we raised last year and we hope to even go beyond. Last year showed us how generous our neighbors are and how much these immigration stories have affected us all. We hope you all will support us financially or by volunteering at our bake sales. Stop by our booth on the 4th of July to find out more about the work of EBSC and/or to volunteer with our campaign to raise funds for the children awaiting reunification with their family members.

I know many of us feel rather helpless right now and this is an opportunity for our small community to come together and support a very worthy non-profit doing excellent work. Check out EBSC here.