The El Cerrito Police Department (ECPD) is run under the leadership of Paul Keith. As the  department head, Chief Keith makes a combined salary with benefits and pension obligation of more than  $400,000 annually. He is responsible for the safety of our community, a police department with 54 staff, including 39 sworn police officers, and for informing the city manager and city council of police activities. His department’s budget uses close to 30% of the City’s general funds. Based on how much resources are devoted to this department, as well as the current push for re-imagining public safety, it is definitely a worthy effort to evaluate the department’s effectiveness and efficiency and budget allocations.

Each year the ECPD Chief publishes an annual report https://www.el-cerrito.org/DocumentCenter/View/14200/Annual-Report-2019- full of stories, staff pictures (see the new k-9 for dog lovers) and of course statistics. This report is for us, and is intended to. provide information about ECPD’s activities and financials. The annual report statistics shown below, actually don’t tell us anything about effectiveness. The annual report simply documents for us the types of calls and crimes, not whether they were solved or cleared. 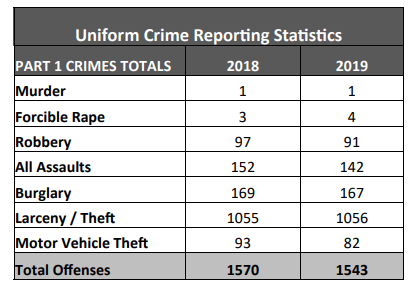 To find out about clearance rates in El Cerrito, a resident or city official would have to go to the Open Justice PortalOpenJustice. Seems like that simple statistic of clearance rate should be part of the Annual Report, but it’s not and unless we ask, we would not know. Many thanks to Chief Keith who provided us with this resource when asked at the recent Police Town Hall so we could further explore or complete the annual report narrative.

The Open Justice Portal provided us the opportunity to look not only at El Cerrito, but at our neighboring communities. We discovered that El Cerrito’s clearance rates were  low. By comparison, this is still the case. (See chart below.)

The ECPD does not  have a robust rate of success with the exception  of forcible rape at 25% which many would not tout as successful  Please note that four reports of forcible rapes were made in El Cerrito in 2019 (and three in 2018)  compared with 15 for San Pablo. Among aggravated assaults there were 276 in San Pablo and about half that amount in El Cerrito.

In general, this entire exercise really leads to a bigger question. What exactly are police doing these days and do we need a police force like the one we have?  So many police, including our own chief, say that if we may not be able to stop crime, we can at least bring people to justice.  But it appears that the latter has not been all that successful, even in comparison to other cities.

Before our city makes any cuts to recreation, senior services or day care, let’s be sure we know the following:

-Break down the categories of calls for services and the actual incidents to which ECPD responds. How much time, for example, (and how much budget) is devoted to people affected by homelessness and people with mental health problems?

-Address why El Cerrito has the highest crime rate, especially in relation to San Pablo who spends a similar amount of money per resident.

We as a city need to come to terms with what size force we need, particularly as we face a 5.5 million dollar deficit. There’s a philosophical question: Do we need police as we know it?  And there’s a practical question: How can we maintain services like recreation and parks, senior services and meals, and childcare and activities for youth – services that we know people use and need, when we spend so much on policing? And to what end?