On Thursday, June 11th El Cerrito turned out in mass driving cars, riding bikes and on foot to continue to support the Black Lives Matter movement and the call to end police violence. Organizers were overwhelmed with the numbers of cars-well over 150, and the caravan slowly traversed the southern part of El Cerrito, headed toward the hills and eventually wound its way down to City Hall. Although many of the cars continued to home destinations upon reaching the end site, other folks remained for a short Q and A about the city, the police budget and community services.

According to recent statistics released by Together We Will Contra Costa,https://www.facebook.com/TogetherWeWillContraCosta/photos/a.374061802964744/1122106224826961/?type=3&theater the El Cerrito Police Department represents 25% of the city’s overall budget. Although this is on the lower end for Contra Costa cities, this percentage will increase. Recommendations from the City Manager Karen Pinkos to cut the budget may in fact result in the PD taking a bigger piece of the budget–unless we speak out!

We will continue to hold weekly caravans and plan to look forward to improving on the logistics for next Thursday. Please note we have a route posted below, cars will be moving no faster than 10mph, and bicyclists will be assisting with traffic flow to ensures that the caravan remains in tact. Join us in the display of support.

ECP is currently working on both a community survey regarding policing in our city as well as a list of demands for greater police accountability. We will have more information for you by Thursday.

Communities around the world reacted to the brutal murder of George Floyd at the hands of police, and calls for police reforms echoed from different communities.  Campaigns such as 8cantwait offered harm reduction strategies for local police, and many localities picked up this gauntlet. But the Black Lives Matter movement is more of a tsunami than a wave and the idea of police reform, while laudable, is no longer sufficient to address the historical roots of violence embedded in the institution of policing in our country.  Campaign Zero offers an example of this swift change. Below is a quote taken from their website.

As protests grow, and the violence of policing splashes across the internet, the television screens and in our streets, we are now hearing DEFUND the POLICE.  The conversation has shifted and many people wanting to support the growing movement are asking the question – “what does defunding the police mean?”

Defunding police is about investing in our community.  We are divesting from a violent system and investing in our community to keep us safe. Defunding the police means we don’t overly rely on the police. We build services and reduce the need for police.  It’s about public safety not the enforcement of law.  As I heard recently- community safety is not about law and order – it’s about peace and justice. The 8can’twait campaign issued an example of their shift in their campaign. Note that the strategy calls for the eventual abolishment of policing as we know it, and replacing a violent system with a model that promotes community well-being. I encourage you to watch the clip with Trevor Noah.  The speakers can discuss this more aptly than I.  https://www.youtube.com/watch?v=PVW2eaCyC5c

Below is a graphic from the 8cantwait campaign that clearly illustrates the difference in strategies.

And here is the original campaign below.

El Cerrito Police Chief Paul Keith released a letter today (June 10th) on how the city’s policies were meeting the standards of this graphic above. https://www.el-cerrito.org/DocumentCenter/View/14317/ECPD-Letter-regarding-8cantwait- On the surface, you might say that the policies are fairly in line. I urge you to link to  the manual and read from page 44 about use of force.  https://www.el-cerrito.org/1391/Policies  As long as “qualified immunity” exists, as long as a police officers can say “I was under threat”, and get away with murder,  all those  bans on choke holds and use of force are not enforceable- if they were, George Floyd would be alive as well as many others.

We are at a moment in time when our pressure, our voices, our sustained efforts can make a difference.  We cannot be complacent.  We cannot be complicit.  Just last week we said – End White Silence.  The time is now! Please join us tomorrow June 11th at 5:30 p.m  We will assemble at the El Cerrito Plaza BART Parking Lot and travel through the neighborhoods with our message: Invest in Communities – Not Police 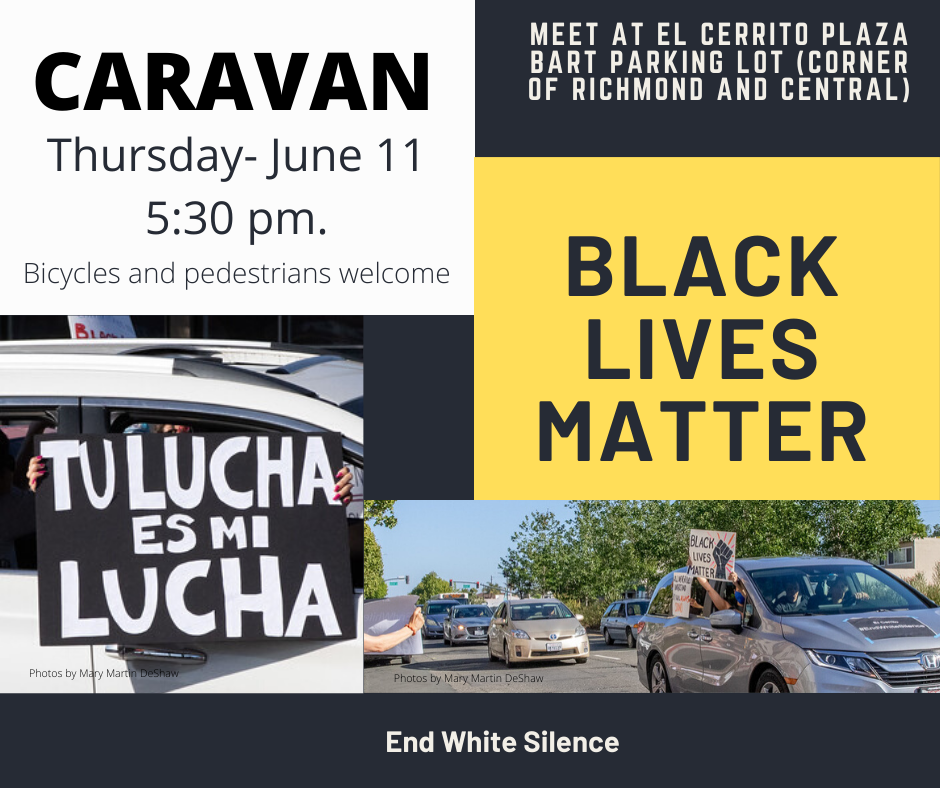 Short articles on what it means to defund the police-

In August, 2019, the City Council heard from the public about the importance of addressing climate change at the local level. This included information from The UN Intergovernmental Panel on Climate Change definitive report in 2018 urging a reduction in GHG by 50% by 2030 to maintain the global temperature increase below 1.5 degrees Celsius, and to reach net zero GHG no later than 2045.

At that time, the City Council adopted a RESOLUTION ENDORSING THE DECLARATION OF A CLIMATE EMERGENCY AND REQUESTING REGIONAL COLLABORATION ON AN EMERGENCY MOBILIZATION EFFORT TO RESTORE A SAFE AND STABLE CLIMATE.

The staff report about the Resolution states that, “the City of El Cerrito’s declaration would commit the City to reinforce citywide efforts on climate change, with the belief that people locally and around the world have a right to a clean and healthy environment.” The resolution is consistent with El Cerrito Strategic Plan Goals E (ensure the public’s health and safety by supporting initiatives that decrease pollution and improve the health and prosperity of future generations) and F (foster environmental sustainability citywide by supporting implementation of the Climate Action Plan and policies that would help the City, and the State, meet their GHG reduction targets).

By adopting a Climate Emergency Resolution, El Cerrito has joined over 1,000 jurisdictions around the world. The Resolution and staff report can be found here on page 26.

The City Council also made a commitment to convene a Council ad-hoc committee on climate action, which was tasked with identifying action items that could be taken more quickly by the City to reduce GHG emissions.

Here are some videos to share with young people and others who want to understand about GHG.

As we watched the horror of George Floyd take his last breath – we must speak out against police violence.  And we know this is not a single incident but a systemic issue. We know this because Amy Cooper, a white woman using white privilege threatened to call the police on a black man, knowing full well that such a call could lead to the tragic outcome of death, because it has happened so many times before.

Now we see our society in chaos, and as our Governor stated in recent days, we have failed black people and we have failed people of color.  Our system of justice does not work for all, only for some.  It is time for us to interrupt racism and the silence that makes us complicit when we don’t speak out. We shall not be complicit in a system that places value in white lives over people of color.

We invite you to stand in solidarity with those who are seeking justice for the George Floyds that have passed through our world prematurely- who leave behind families and friends- who might have been your brother or sister or cousin. Who might be here today if they were white.

El Cerrito Progressives invite you to End White Silence by joining community members on Thursday, June 4th at 5:30p.m. in front of City Hall and the Police Department along San Pablo Ave. The action will be following the health guidelines under our City regulations.  Standing areas will be marked 6 feet apart and all attendees are required to wear a mask.  We will also have a caravan for those who prefer to be in a car.  Cars will be meeting at the DMV and circling the immediate area. We encourage people to bring a sign that reads END WHITE SILENCE.

For a pdf copy of this graphic for you car etc please click here.

Another local resource to support and learn more about the issue of police violence: https://www.antipoliceterrorproject.org/