In case you haven’t heard ….

On Saturday, October 7th, Governor Jerry Brown signed AB 249, The California Disclosure Act, presenting voters with increased information on who’s paying for political ads. In the midst of much debate among campaign officials as to whether the bill will hinder donations, Gov. Brown signed AB 249 into law.

“No more fine print. California voters will now be able to make informed decisions, based on honest information about who the true funders are of campaign ads. This transparency is critical to our democracy and I am proud that California has taken this historic first step to shine the light on ‘dark money.’ Hopefully this will encourage others to follow suit.”

Some have criticized AB 249 as not going far enough in disclosure and transparency that involves political contributions. Analysts with the Fair Political Practices Commission (FPPC) felt the reduction of fines for violations of the Disclosure Act weakens the bill, and see the bill as making it more difficult to prove certain campaign finance cases. However some attribute criticism to debates between proponents and opposers to the bill.

To delve further into the Governor’s signing of AB 249, reference: THE SACRAMENTO BEE: Who’s behind that political ad? Voters will know more in 2018 and an earlier article in the SAN FRANCISCO CHRONICLE: State Democrats squabble over revealing who pays for political ads.

Please also comment on information presented in this communication and note any errors or discrepancies.

During a forum held  in Albany by the Berkeley/North East Bay Chapter of the American Civil Liberties Union and moderated by ACLU of Northern California Executive Director Abdi Soltani, three East Bay cities will be represented by their police chiefs in a November discussion on racial profiling and protecting public safety.

The event will be held at the Community Center:

On Sunday November 19th, from 3:00 PM to 4:30 PM, Chiefs Andrew Greenwood of Berkeley, Paul Keith of El Cerrito, and Allwyn Brown of Richmond will respond to panel-fielded questions from the audience regarding policing and racial profiling within the three East Bay cities.

The Berkeley/North East Bay Chapter of the American Civil Liberties Union covers portions of the East Bay from Berkeley to Crockett.

The information stated in this article was derived from: EAST BAY TIMES: Triumvirate of local top cops to headline ACLU forum in Albany

View the ACLU announcement of this event on Facebook.

Thankfully California’s Governor Brown has insight into the dangerous impacts of climate change, as he vigorously pushes for policies to alleviate further environmental destruction.

Extreme environmental destruction is currently exhibited by the ongoing California wildfires. Officials have yet to decipher the cause of the Northern California inferno. But they do have a fairly firm handle on what has made the fires so destructive. The blame is placed on winds strong enough to the knock down power lines, seriously dry conditions, large amounts of dry brush and material, and long periods of drought that have combined to cause the conflagration of close to two dozen connected fires. This summer was California’s hottest on record. Even San Francisco hit 106 degrees on Sept. 1 during a statewide heat wave.

Fast-moving fires burn across remote and mountainous areas, as well as throughout suburban communities. More than 3,500 homes, businesses, and additional structures have burned to the ground. In Santa Rosa, the Napa-Sonoma-Lake counties’ Tubbs fire actually leaped across the 101 Freeway. Thursday October 12th, the latest CNN report counted 31 deaths with over 400 people missing.

“These kinds of catastrophes have happened and they’ll continue to happen.” Gov. Jerry Brown observed at a news briefing Wednesday. “That’s the way it is with a warming climate, dry weather and reducing moisture.”

More information on the California Wildfires is available at THE LOS ANGELES TIMES Editorial: The climate-change fire alarm from Northern California, from which the bulk of this information was derived.

Democratic state senator representing Silicon Valley, Jim Beall personally experienced housing insecurity. In 1966 when the now senator was 12, the Beall’s house burned down leaving the family homeless. They lost everything.

“It really set the family back,” Beall said. “The first few weeks, we had all 12 of us in a motel room.” For months the family split up around the city, sleeping on the couches of friends and relatives.

Beall’s family was able to rebuild through a loan similar to loans that would be available to low-income Californians and veterans under the senator’s new measure.

Senator Beall, with empathy from experience, addressed the need for affordable housing by passing Senate Bill 3. Bill 3 creates a $4 billion bond to battle homelessness with a variety of affordable-housing programs, including $1 billion in home loans to veterans.

During a Sacramento news conference, Sen. Beall reflected, “There’s a lot of us who have had those personal experiences of homelessness.”

In agreement with the senator’s statement, late last month Governor Jerry Brown signed Senate Bill 3 at a San Francisco public ceremony. Next year California voters will decide whether to approve the bond required to fund the bill. Bond funding for Bill 3 — totaling $15 billion when considering federal tax credits — will possibly be the largest state housing bond in U.S. history.

Bill 3 would mean “the opportunity to finally have some really meaningful tools for the state to address [housing] affordability,” said Jennifer Loving, the executive director of the San Jose homelessness nonprofit organization, Destination:Home. “Without this, we’re perpetuating a crisis of suffering for people who can’t afford to live and work in many parts of the state.”

Opponents to funding the bill, however, argue it adds billions to the state’s debt.

During six years in the state Assembly and four years in the state Senate, Sen. Beall, earning the moniker, “the lone wolf,” has always spoken his mind on housing and foster care reform, and has strongly promoted help for the mentally disabled. “He fights for the most vulnerable with a ferocity unmatched,” said Senate President Pro Tem Kevin De León, D-Los Angeles.

This year Sen. Beall has also sponsored a new gas tax to fund road and transit improvements, and a bill to fund traffic congestion programs that may increase tolls on Bay Area bridges.

Senate Bill 3 is one of a Senate housing bill package passed to address the housing crisis in California. 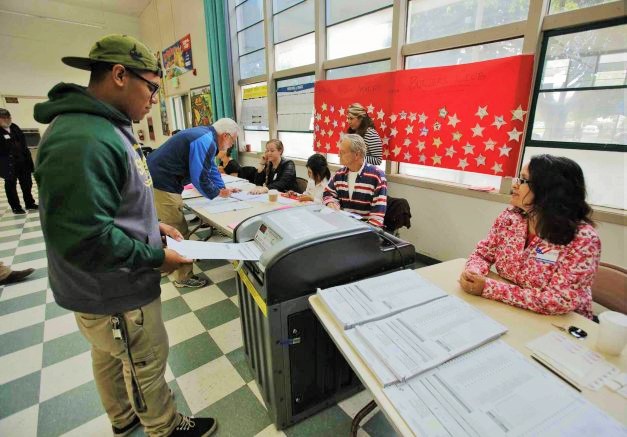 Voting has become a major issue nationwide,with both ‘right-leaning’ and ‘left-leaning’ constituents feeling disenfranchised. The seeming conservative solution of this political era is to restrict access to the vote for those demographics that tend to lean towards liberal politics and issues.

The combative voting rights struggle between the ‘right’ and the ‘left’ has now hit California. A movement is forming from the ‘right’s’ perspective that challenges the California Voting Rights Act. Some politically-invested proponents of voting rights maintain that the challenge could make it more difficult to elect non-white candidates in California and perhaps nationwide.

The challenge and complaint was filed by Virginia-based Project on Fair Representation. The Project on Fair Representation is responsible for the Voting Rights lawsuit filed in Shelby County, Alabama that culminated in the 2013 Supreme Court’s removal of the national Voting Rights Act’s key enforcement equation. The organization also contributed to drafting the suit that challenged affirmative action in admissions to state universities.

Last week the leader of the Project on Fair Representation, Ed Blum, filed a suit targeting the California Voting Rights Act, branding the law as unconstitutional. The suit maintains the voting law allows the state to force creation of local political districts that consider racial representation rather than top vote getters.

“The CVRA has recently been utilized by a handful of attorneys to demand that dozens of California localities to abandon longstanding, at-large forms of voting systems in favor of race-based, single-member districts,” Blum’s press release stated. “The lawsuit asserts that the California Legislature did not follow Supreme Court decisions making clear that race cannot be the predominant factor in redistricting. The complaint emphasizes that the California Voting Rights Act makes race the only factor in redistricting.”

The focus of Blum’s case is the city of Poway in Southern California, whose mayor favors maintaining the city’s at-large campaign and voting system. However the lawsuit could gain the momentum to end up in the Supreme Court.

More information is available on the suit against the California Voting Rights Act in the article ALTERNET: Right-Wing Crusader Launches Dangerous Project That Could Slash the Number of Elected Minorities in California, from which this notification was derived.