While the future of Net Neutrality bleakly hangs on the FCC’s upcoming December vote, the agency has been multiply busy on other issues:

But beyond Sinclair, the rule change simply means there could be far less competition and more of a top-down structure in local media markets. [Bloomberg]

On Tuesday November 2nd, House Republicans presented a tax bill that seems to expand savings for high income Americans,while is decreases the economic and income benefits of middle class and working class Americans. The GOP tax proposal limits or eliminates many popular tax incentives that reduce tax liabilities for most taxpayers, especially in high-cost areas like California.

The limits on tax incentives include:

The high-income incentives include:

For individual taxpayers the rates are: 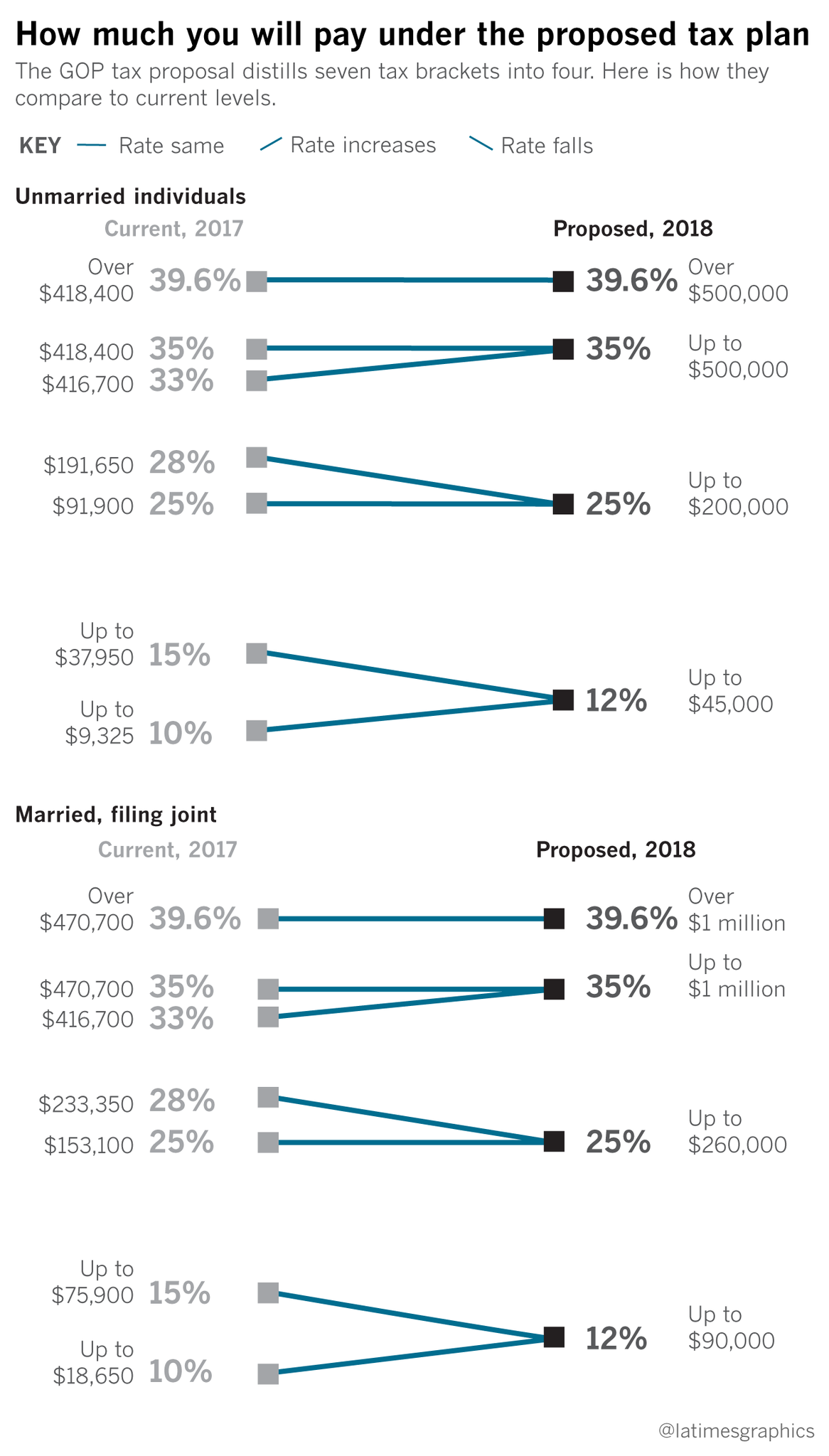 One of Trump’s top priorities, the tax bill faces a harsh process before it meets the presidents desk, testing GOP unity in a struggle to deliver a tax proposal that will limit government, place additional tax burdens on the majority of Americans, and undoubtedly require cuts to fundamental social programs.

According to the Congressional Joint Committee on Taxation, the tax plan would add $1.5 trillion to the deficit over 10 years.

Amidst the anticipated stark economic forecast ushered in by the proposed tax bill, House Speaker Paul D. Ryan (R-Wis.) sees the plan — the most ambitious attempt to overhaul the U.S. tax code in generations —  as a tax reform that would save the average American family $1,182 a year.

Senate Minority Leader Charles E. Schumer (D-N.Y.) disagrees, stating, “What we are seeing today is a plan that exacerbates the unfairness and inequality in our tax code. The Republican tax plan would put two thumbs down on a scale already tipped towards the wealthy and powerful. … Surely we can do better.”

Republicans attempt to assure Americans that the tax reform will benefit the country as a whole and help individual taxpayers. However Democrats and progressive activists plan to use the tax issue — considered to be economically poisonous by many economists — as a cornerstone advantage in the 2018 midterm elections.

In case you hadn’t heard ….

Hailed by National Nurses United, the AFL-CIO endorsed Medicare for All and adopted a resolution to support the proposed legislation. At its convention in St. Louis on Tuesday, October 24th the national trade union declared,“… we will support legislation that guarantees health care as a human right through an improved Medicare for All.”

Spearheaded by a unanimous vote, the resolution continued to state that the Medicare for All healthcare system “must guarantee everyone can get the health services they need without exclusions or financial barriers to care.” To ensure that end, the AFL-CIO vowed to summon its affiliates and constituents towards accomplishing a victory for a Medicare for All approach to healthcare.

The proposed resolution was inspired by Sen. Bernie Sanders’ Medicare for All Act, which is co-sponsored by one-third of U.S. Senate Democrats.

Significant within the AFL-CIO resolution is a call for “retaining a role for workers’ health plans, and retaining the Department of Veterans Affairs health care system as the primary direct provider of fully integrated care to veterans.”

For an indepth look into the AFL-CIO endorsement of Medicare for All, see NATIONAL NURSES UNITED: Nurses Welcome AFL-CIO Call for Medicare for All Resolution Pledges to Make Health Care for All a Reality, from which this information was derived.

An prime objective of the ACLU (American Civil Liberties Union) has been the century-long mission to protect the First Amendment — the right to free expression. Abdi Soltani, ACLU’s Northern California Director, sees the First Amendment as “an incredibly important set of principles”. Soltani is also dedicated to rights and protections for immigrants and undocumented residents, tirelessly guiding the ACLU of Northern California towards defending those rights.

During his tenure as Director of the ACLU of Northern California Abdi Soltani has extended organizational activity further into the Central Valley, adding an office in Fresno. The focus of the expanded organization is to fight anti-immigration policies, push towards bail reform and assist in decreasing the number of people behind bars.

Soltani specifies one issue on which the Northern California ACLU is focused to be a long-term lawsuit against Fresno County that cites inadequate access to counsel for those facing criminal charges. Another concern that the organization is contending, with significant progress through state legislation, targets unaffordable bails for those incarcerated in California jails.

In addition and as a result of the national ‘muslim ban’ with Iran as one target, Soltani has received numerous appeals from Iranian immigrants.

“I was getting phone calls, text messages and emails from Iranians all over the world,” Soltani stated in a recent interview. “Either Iranians in America fearful of losing a visa, and people whose visas were about to expire and wouldn’t have anywhere to safely go to, and people whose grandparents were stranded en route at European airports. So here I am, an ACLU director, and here I am, an Iranian-American, and those two merged right into one thing.”

Abdi Soltani is an Iranian-American who was born in Iran, and immigrated to the U.S. when he was 9 years old. He grew up in Massachusetts and came to California to attend Stanford University.

“I got interested in the ACLU working as a community organizer working on civil rights,” says Soltani. “Working as an organizer, our whole job was to build power among low-income people and communities of color, including youth. One form of power in our society is legal power, and I liked the idea that they should have access to legal power.”

When Soltani joined the ACLU as executive director, he had already worked alongside the organization for over a decade. Fresno became a priority location for Soltani since previously, as a community organizer, he had worked against the Fresno raid of homeless camps and the destruction of homeless people’s property, including medication and personal mementos.

A high respect and appreciation of poetry and the arts as proponents of human rights and the value of the human experience places artistic expression high on Soltani’s list of contributors to societal principles.

For more information on Abdi Soltani and the ACLU of Northern California, refer to TRUTHDIG: What One ACLU Director Is Doing to Protect Rights, from which this information was derived.

Did you know that the average cost for a three-day hospital stay is about $30,000? Or that a broken leg can cost up to $7,500? All too often, hard-working American families are just one sickness or injury away from bankruptcy, but health insurance helps protect you.

Since the implementation of the Affordable Care Act (ACA), approximately 20 million previously uninsured Americans have gained affordable coverage. Thanks to the ACA, California has witnessed the most dramatic gains in coverage nationwide – uninsured rates have been cut by more than half and residents now have more insurance options.

From now until January 31, 2018, you and your family can purchase a plan or renew your coverage through Covered California. If you sign up before December 15, 2017, you can get coverage that begins on January 1, 2018.

If you have any questions about signing up or the plans available, more than 20,000 certified agents and enrollers throughout California stand ready to assist you with free, confidential assistance at http://www.coveredca.com/get-help/local/.

Here are a few facts you need to know about enrolling in coverage or renewing your coverage:

Additionally, my Walnut Creek and Richmond offices are available to help connect you and your family with the resources you may need during open enrollment.

As always, please do not hesitate to contact my office about this or other issues if we can be of assistance.